Christopher Welch was born in Lamyatt, Somerset as the only son of Christopher and Mary Welch. In 1851, aged 18, he was admitted to Wadham College, Oxford and obtained a First Class Degree in Natural Science in 1855. He graduated with a Master Degree in 1857.

Alongside his interests in Natural Sciences he was also a distinguished amateur flautist and composer of works for the flute. He died in 1915. 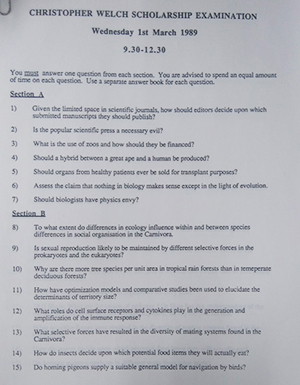 Christopher Welch Scholarships were approved by the University Convocation in February 1917. In 1931 women were allowed to compete for the scholarships on the same conditions as men.

Initially candidates were required to demonstrate their ability in botany, animal physiology (or physiological sciences from 1974), or zoology. Later on further subjects were added: biochemistry (1951), experimental psychology (1974) and pure and applied biology (1985).

Up until 1991 scholarships were awarded on the basis of a candidate’s performance at an examination (both written and oral), as well as testimony submitted by them of their capacity for original observation and research.

The written examination would last 3 hours and would consist of part (a) General Questions and part (b) Special questions. Candidates were expected to answer one question from each section, and were advised to spend an equal amount of time on each question. Part (b) contained at least one question of candidate’s declared ‘Special area for examination’.

The oral examination (viva voce) would take place a few days after the written examination.

Candidates were required to wear sub fusc on both occasions.

On the University of Oxford site