We talk to Department of Biochemistry’s Professor Elspeth Garman about her research and teaching career, which spans both the Medical Sciences Division and the Mathematical, Physical and Life Sciences Division.

Tell us a little about the work in your lab? 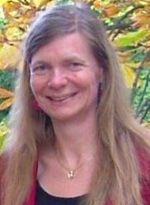 The group is largely engaged in improving experimental methods for structural biology, both for three-dimensional structure determination of large biologically relevant macromolecules such as protein and protein complexes by X-ray crystallography, and also for identifying metals in these proteins using a technique more commonly used in nuclear physics research: proton induced X-ray emission (PIXE). Additionally we also determine novel structures, most recently of an enzyme called TBNAT (arylamine N-acetyltransferase), a protein involved in the formation of the waxy coat formed round mycobacterium tuberculosis in its latent phase in human cells.

Why does this research matter?

Structural biologists determine the three-dimensional structures and functions of medically important biological macromolecules: proteins and nucleic acids. The problems being tackled nowadays are much larger and more complex, and the crystals used much smaller and more radiation sensitive than in the past. The structural research only becomes tractable by continually improving the experimental techniques that we use. Thus our efforts contribute to underpinning the advances in the biological information that can be obtained from 3-D structures.

The PIXE technique, which we carry out at the Ion Beam Centre at the University of Surrey in Guildford, is unique and very powerful. We have now analysed over 250 proteins and can calibrate the stoichiometry to within 10% of the metals in the protein by using the X-ray signal from the known number of cysteines and methionines in the primary sequence. Protein function surmised from sequence identity with another similar protein can be incorrect, and unambiguous knowledge of the metal contact can help avoid misidentification.

What challenges do structural biologists face? 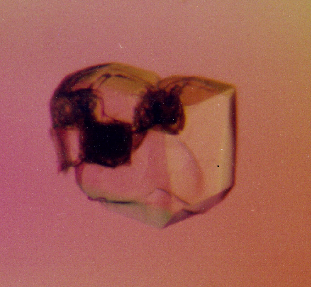 Currently the big challenges in the field of structural biology include the determination of the structures of large functionally relevant complexes and of more membrane bound proteins.  Traditionally we have ‘divided and conquered’ by studying individual proteins, but to understand mechanistic pathways, knowledge of interactions between the different proteins involved is key. Membrane proteins are difficult to crystallise due to their lack of solubility in water, upon which most crystallisation techniques depend, but new techniques development is gradually making this more tractable. Taking a wider view, very recently significant improvements in the detectors used for electron microscopy vastly extend the level of information and detail that can be obtained from both single particle imaging and 2-D crystals, with the combined information from crystallography and electron microscopy enlightening the function and pathways of biologically important entities. I recently published a review on likely future developments in macromolecular crystallography for journal Science: http://www.sciencemag.org/content/343/6175/1102

How many people are there in your lab? As of October 2014, I will have 7 in total: 4 graduate students, one 5 month Wellcome Trust rotation graduate student and 2 undergraduate Part II Biochemists (M.Biochem final year 18 week projects). The background of the graduate students is wonderfully mixed: I have one Biochemist, shared with Dr. Simon Newstead, who is working on membrane proteins, one computer scientist, and two Mathematicians who fell in love with crystals during 11 week rotations in the group as part of their MPLS Doctoral Training Centre first year programme. This mixture is wonderful: we have weekly Journal Clubs and discuss our way through the relevant literature. I encourage the students to work cooperatively: each student brings a different expertise to the group, and the whole is much more effective than the sum of the parts. 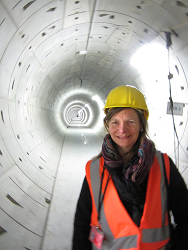 Rich and varied! No two days are the same and that is what I love about the job. I frequently plan my day whilst cycling in to work, and realise on the return journey that nothing I had imagined doing during the day has been achieved, but other aspects have moved forward. Typically I have meetings with the graduate students, a Skype call or two with collaborators elsewhere, answer email queries from other researchers round the world about our widely used software for calculating the radiation dose in protein crystals (RADDOSE), deal with my Journal editing and refereeing responsibilities, discuss the status of the crystallographic facilities in Biochemistry with Dr. Ed Lowe, our facilities manager, as well as moving forward our group publications and our experimental plans for our next synchrotron run.

How has being at Oxford helped your work?

The main benefit of being in Oxford is the fantastically high standard of the undergraduate and postgraduate students that have worked in my group, and who have enabled us to move much further forward than I had hoped. I also think that the international atmosphere is very positive and enhances productivity and lateral thinking in the lab.

I already have quite a few collaborations with various scientists around the University. If anyone reading this would like to know what metals are in their protein/nucleic acid samples, please do get in touch! 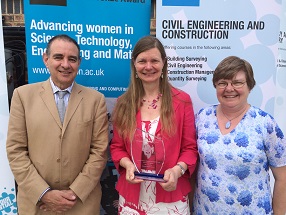 I loved Physics at school (a Church of England Convent in North Yorkshire), and decided to do a Physics degree. Before starting, I had a ‘gap year’ and went to Swaziland in Southern Africa to teach in a big Secondary School in Manzini. I had to fill in for all the other teachers and ended up teaching everything except for Zulu! I loved it there and came to realise that I very much enjoy teaching.  I then went to Durham University for a 3 year degree in Physics. I did a summer studentship at CERN in Geneva at the end of my second year and decided that although I was very interested in nuclear physics, I wanted to control more of the experiments myself, and High Energy Nuclear Physics involved too many people per experiment, so I came to Oxford Nuclear Physics Department to do a DPhil in Experimental Nuclear Structure, which I got in 1980. I married my landlord in 1979, and he had a permanent research position in atmospheric physics in Oxford which he loved, so I also wanted to stay working in Oxford if at all possible.

For 7 years after my D.Phil, I had various posts in Nuclear Physics: a Science Research Council Fellowship and then a Research Officership (6 year advanced postdoc). I also taught Physics round the University, including at Somerville College, where I met the late Professor Dame Louise Johnson, who was a Biophysicist and with whom I talked about what I would do next. At the time (1987) funding for Nuclear Physics was drying up, and I said ‘Oh, I don’t know, I suppose I will have to change fields’. [I really didn’t want to think about what would happen when my contract with them ran out the following year: I had a 3 year old (born 1984) daughter and an aged mother-in-law living with us, and I had my hands full.] Louise said that her lab (Molecular Biophysics) was looking for a technical person to run the new X-ray equipment for protein crystallography that would be delivered soon, and they had not found anyone suitable. Would I come to the lab the next day and have a look? Well, I moved there 4 weeks later, having never done any Biology and not knowing what an amino acid was! I worked part-time for the next 16 years, looking after and managing the X-ray facilities until 1999, when I started my own group, and then went full time in 2003.

Meanwhile I had another daughter in 1991, and acquired a 13 year old Swazi foster daughter in 1995, when her mother, whom I had taught in 1973, died. She stayed in Swaziland and went to boarding school, so did not come and live with us.

By 2003 I had worked to establish the techniques involved in cryo-crystallography, taught all over the world, and had a few papers published (about 80). I was then fortunate to obtain a teaching/research post in the Department of Biochemistry, for whom I lecture a first year Principles of Mathematics course for Biochemists and (now) Biomedical Scientists. In 2008 I was awarded the title of Professor and in 2009 I ventured on a 50% secondment for 5 years to the MPLS Division to direct the Life Sciences Interface Programme at the Doctoral training Centre, moving to the Systems Biology Programme in 2011. This secondment, is about to end and I am looking forward to being in Biochemistry 100% again and spending more time with my group and colleagues there, although I have hugely enjoyed supervising over 80 different graduate students over the last 5 years during their first DTC year.

Earlier this year, Professor Elspeth Garman was announced as the 2014 'Most Acclaimed Lecturer' in Medical Sciences at the Oxford University Student Union (OUSU) Teaching Awards and she also received a 2014 ‘Individual Teaching Award’ from Mathematical, Physical and Life Sciences (MPLS) Division. Professor Garman also delivered the 2014 Rose Award Lecture at the University of Kingston, which recognises the contribution of distinguished female scientists and Engineers.