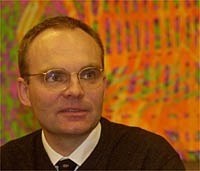 The Division congratulates Professor Lars Fugger, Professor of Neuroimmunology on receiving a knighthood, which as of the 7th February 2011 was bestowed on him by Her Majesty the Queen of Denmark with the order of Dannebrog (the name of the Danish flag). Lars did his medical training in Copenhagen and then trained as a clinical immunologist at Stanford University and in Copenhagen and moved to Oxford in 2002 where he works in the WIMM and is a member of the Nuffield Department of Clinical Neurosciences. In addition to his research on the neuroimmunology of multiple sclerosis, for the past 4 years he has also been the Chief Executive Officer of the Danish Medical Research Council, flying over to Denmark for 1-2 days every week.  His knighthood is in recognition of his enormous contribution to Danish biomedical science.