Award presented at the World Congress on Osteoporosis, Osteoarthritis and Musculoskeletal Diseases honours UK researcher for his distinguished body of work in the epidemiology of musculoskeletal disorder 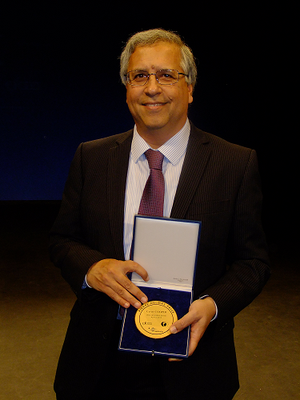 Presented at the opening of the World Congress on Osteoporosis, Osteoarthritis and Musculoskeletal Diseases in Seville, Spain, the prestigious annual Prize honours an outstanding researcher who has made major scientific contributions to the study of bone and mineral diseases. The Prize, granted by the European Society for Clinical and Economic Aspects of Osteoporosis and Osteoarthritis (ESCEO) and the International Osteoporosis Foundation (IOF) with the support of Servier is valued at 40,000 EUR.

Presenting the Prize in Seville, Professor Bess Dawson Hughes, IOF General Secretary, commented “We are delighted to present this award to one of the field’s most distinguished scientists and educators. Cyrus Cooper has been identified recently as among the 400 most influential biomedical researchers worldwide and the highest ranked within the bone field. His body of work has made essential contributions across several key areas. Most notably, his pioneering clinical studies on the developmental origins of peak bone mass have provided invaluable insights that impact on a wide spectrum of research within the field.”

Professor Cooper leads an internationally competitive programme of research into the epidemiology of musculoskeletal disorders, most notably osteoporosis. Key research contributions have included the discovery of the developmental influences which contribute to the risk of osteoporosis and hip fracture in late adulthood; demonstration that maternal vitamin D insufficiency is associated with sub-optimal bone mineral accrual in childhood; characterization of the definition and incidence rates of vertebral fractures; and leadership of large randomized controlled trials of calcium and vitamin D supplementation in the elderly as immediate preventative strategies against hip fracture. Professor Cooper is Chairman of the IOF Committee of Scientific Advisors; Chair of the MRC Population Health Sciences Research Network; Associate Director of Research at the University of Southampton Medical School; and Associate Editor of the journal Osteoporosis International. He has published over 630 research papers on osteoporosis and rheumatic disorders.

Congratulations are in order for postdoctoral research scientist Dr Christoph Treiber who has been awarded a Starting Grant from the European Research Council. His funded project will investigate the genetic components that may contribute to diversity of brain function and behaviour.

Members of the Medical Sciences Division have been recognised in the New Year's Honours list for 2022.

Coronavirus researchers from across Medical Sciences have been honoured at the 2021 Times Higher Education (THE) Awards.

Her Majesty The Queen has approved the award of The Queen’s Anniversary Prizes to twenty-one higher and further education institutions, including Oxford University, in the most recent round of the independently reviewed scheme. This prestigious award is the highest national honour available to universities and FE colleges across the UK.