The Prime Minister, David Cameron, was at Oxford University today to mark the launch of a centre that will put the UK at the forefront of revolutionising healthcare through 'big data' and better drug discovery. The new Li Ka Shing Centre for Health Information and Discovery is supported by a £20m gift from the Li Ka Shing Foundation, announced today, and £10m for big data research from the Higher Education Funding Council for England, also newly announced today. 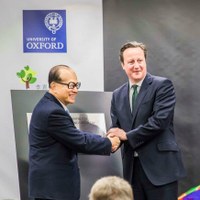 The potential of 'big data' to revolutionise health research and offer patients better, safer and more personalised treatments will be a major focus of the centre, which will be unique worldwide in providing a dedicated centre of excellence in the emerging field of big data in medicine.

The new Li Ka Shing Centre is being developed in two phases. The first phase will use high-throughput biology to define better drug targets in collaboration with industry, addressing a critical 'blockage' in the existing drug development process. The second phase will focus on the analysis of large data sets, bringing together leading researchers from across genetics, epidemiology and public health, clinical medicine, computer science and IT, statistics and bioinformatics.

"I am delighted to be backing our medical science sector and supporting the Li Ka Shing Centre for Health Information and Discovery, which has the potential to revolutionise medical research and healthcare in this country and beyond.

"The Li Ka Shing Centre for Health Information and Discovery will pioneer new advances in the analysis of medical data which can help scientists to better understand human disease and its treatment. “This will help to further develop a strong and competitive science and research base in this country which is vital for the UK to compete and thrive in the global race."

"What will happen here is more than the promise of harnessing the power of a data-intensive revolution to improve health care. The work of this centre will identify innovative ways to increase access to health care while lessening the burden of cost. It will free up resources for much needed investments in educational opportunities. And it will lead to new and deeper competencies that are pragmatic – precise solutions to sustain hope and stability today and lead to even greater discoveries tomorrow."

"Big data will transform the way we treat patients and understand disease in the coming decades. We are collecting much of this data already. We owe it to ourselves to make full use of it and deliver more effective treatments for all of us as patients. The Li Ka Shing Centre, and this enormously generous gift which underpins it, along with continued public investment, will be instrumental in driving this research forward."

The Centre is being built in two, linked phases and will house up to 600 scientists when complete. In the £35m first phase a new building has been completed on the University's Old Road Campus in the east of the city, which the Prime Minister visited today. This Target Discovery Institute will shortly house research generating comprehensive data about disease using genomic and chemical screens – important data for the early stages of drug discovery.
The second phase of the Centre, the Big Data Institute, will also be accommodated on the University's Old Road Campus. These two related areas of activity harness novel 21st-century opportunities in healthcare and represent the first examples of these types of research endeavours in academia anywhere in the world.

The two Institutes together form the Li Ka Shing Centre for Health Information and Discovery, which has been boosted by the £20m gift from the Li Ka Shing Foundation, in particular through funding new research positions. The £10m announced today from HEFCE through the second round of its Research Partnership Investment Fund (RPIF) is for the new Big Data Institute building. The Target Discovery Institute received £10m in the first RPIF round.

The Li Ka Shing Centre, through the Big Data Institute, will develop approaches for generating, storing and analysing large datasets in medical science for a better understanding of human disease and its treatment.

Bringing health-related datasets together for researchers to use in an anonymised way, and making use of new tools to scrutinise that data to gain insights, will provide powerful new insights into who develops illnesses and why.

Storing and analysing such vast quantities of data is not straightforward. Making sense of large amounts of complex data, making the right comparisons to generate robust and useful answers, and ensuring the security of the data needs to protect personal privacy are all important challenges.

These research opportunities and challenges will be at the core of the new Big Data Institute. Oxford University already has world-leading expertise in this area: pioneering the introduction of genomics into medical care, leading giant cohort studies like the Million Women Study and UK Biobank, running some of the largest clinical trials of treatment worldwide, and establishing methods for global disease surveillance in malaria and other major infectious diseases.

The Li Ka Shing Centre, through the Target Discovery Institute, will use high-throughput and automated approaches to speed the early stages of drug discovery, by identifying better targets for drug development in important diseases such as cancer, diabetes, dementia, psychiatric conditions and inflammatory diseases.

High-throughput biology brings automation to cell biology so that work that might once have been done by a lab technician with a pipette can be done on a large, high-speed scale. It is capable of generating very large amounts of data and provides the opportunity to systematically analyse biological pathways to understand, at a fundamental level, how these pathways could be manipulated to treat disease.

The pharmaceutical industry is hampered by companies' inability to embark on such extensive and detailed studied of potential targets. This can lead to companies spending literally billions of dollars identifying and developing drugs that are actually not acting on a promising biological pathway – slowing down the process of drugs being available for human health. The work at Oxford sees academia stepping in to fill that critical gap.

General anaesthesia should be more widely available for patients at the end of their lives, according to Oxford experts in ethics and anaesthesia, according to a paper published by Anaesthesia (a journal of the Association of Anaesthetists).

Inhaled budesonide, a common corticosteroid, is the first widely available, inexpensive drug found to shorten recovery times in COVID-19 patients aged over 50 who are treated at home and in other community settings, reports the PRINCIPLE trial in 1,779 participants.

Are you an academic interested in finding out how your knowledge can be used to solve industry challenges? Would you like to widen your network? Meet potential collaborators / future employees? Gain insights into relevant funding schemes? If you answer YES to any of the above, now is the time to register for the AIMday in Women's Health.

One in three COVID-19 survivors received a neurological or psychiatric diagnosis within six months of infection with the SARS-CoV-2 virus, an observational study of more than 230,000 patient health records published in The Lancet Psychiatry journal estimates. The study looked at 14 neurological and mental health disorders.

Cognitive behavioural therapy: we discovered a data gap on its effectiveness for different ethnic groups