“We are very honored to join forces with Oxford, a true global leader in research and discovery, to advance the most innovative treatments for human disease,” said Jonathan Stamler, MD, Director of the Harrington Discovery Institute. “Together we can more effectively enable a drug development model in academia that will move discoveries from the lab to the patient bedside.”

The Harrington Discovery Institute, a nonprofit organization, formed in 2012 to help solve the decades long global problem that drug researchers refer to as the “valley of death.” Universities continue to support research and early development of drugs. But pharmaceutical companies and venture investors who once supported the intermediate stages of development, now often wait until after a new drug’s effectiveness has been proven. That loss of support in the middle stages of drug development is a growing problem that has left many physician-scientists with no choice but to shelve some of their brightest ideas.

“On behalf of Oxford, we are true believers that this unique model that launched at University Hospitals in Cleveland will benefit academic medical centers andtheir efforts to bring cures to multiple diseases,” said Professor Sir John Bell, Regius Professor of Medicine, University of Oxford. “The model enhances our ability to advance medical science and enable our brilliant physician-scientists through strategic funding and business planning.”

Harrington Discovery Institute is currently providing support to 27 physician-scientists in the United States to advance drug therapies that will improve the lives of their patients. This past year, the Harrington Discovery Institute formalized relationships with the Alzheimer’s Drug Discovery Foundation and the Foundation Fighting Blindness as well as the State of Ohio to accelerate the efforts to find new treatments.

“Our overall goal is to advance medicine and society by providing inventive physician-scientists the drug development infrastructure that is necessary to turn a great discovery into a medicine,” explains Dr. Stamler, who is also the Robert S. and Sylvia K. Reitman Family Foundation Distinguished Chair in Cardiovascular Innovation and Director of the Institute for Transformative Molecular Medicine at UH Case Medical Center and Case Western Reserve University School of Medicine. “We view ourselves as a community that seeks the best ideas that can be advanced into medicines to improve the lives of our patients – as physicians and academics we really don’t care where those discoveries come from, just so long as we advance the cutting edge of care; what we care about is excellence and impact. Oxford has brilliant minds and they can help lead our efforts for innovative cures throughout the UK.”

At the center of the newly formed affiliation will be the Oxford-Harrington Scholarship Program; once established, the partnership plans to expand the support of physician-scientists throughout the United Kingdom.

The Oxford-Harrington Scholarship Program will provide support to physician-scientists for preclinical drug research and early-stage clinical trials that hold great promise but may not be far enough along in the drug development pipeline to receive financial support from the pharmaceutical industry. Oxford-Harrington Scholars will have access to the Harrington Discovery Institute’s Innovation Support Center for strategic project management that includes dedicated pharma teams that will be charged with oversight of the drug development efforts of Oxford-Harrington Scholars. To further the transition to the commercial realm, the new model will include an Oxford presence for BioMotiv, a for-profit commercialization company, aligned with the nonprofit Harrington Discovery Institute in its mission to advance drug discoveries by academic physician-scientists. 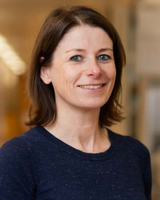 The University of Oxford selected Alison Simmons, MD, PhD, as the first Oxford-Harrington Scholar. Professor Simmons, a gastroenterologist, is trying to understand how excess inflammation damages the gut in Crohn’s disease, a disease that affects nearly one in 200 people. She has discovered that defective immune receptors in gut cells can lead to an impairment of the normal defense mechanisms needed to control harmful bacteria. This inability to remove harmful bacteria can then lead to chronic inflammation in the bowels of these patients. Based on her work, she is also developing new therapies to correct this defect and reduce the damaging inflammation that occurs in Crohn’s disease.

“It is our hope to maximize our efforts for innovative drug discovery at Oxford and throughout the United Kingdom,” added Professor Sir John Bell. “Our collaboration with the United States-based Harrington Discovery Institute furthers our support of our greatest assets – our physician-scientists at the front line of treating patients and finding cures. This newly founded partnership will help bridge the gap between preclinical research and commercialization, and will ensure that our academic mission is met.”

Image: Professor Alison Simmons - Oxford University selected Alison Simmons, MD, PhD, as the first Oxford-Harrington Scholar. Professor Simmons is a gastroenterologist whose research into inflammation that occurs as part of Crohn’s disease has uncovered immune receptors that become defective. She is investigating new drugs that work by modifying the body’s immune system to cut down inflammation. One in 200 people have debilitating inflammatory bowel disease, like Crohn’s disease.

Harrington Discovery Institute at University Hospitals, launched in February of 2012 with a generous gift from the Harrington family of Hudson, Ohio, is part of a $250 million national model, The Harrington Project for Discovery & Development, to accelerate the development of medical breakthroughs by physician-scientists into medicines that benefit patients. The model aligns, through mission and structure, nonprofit and for-profit resources into a new system for drug development. It addresses a set of major challenges in medicine that have created a development gap for promising discoveries and contributed to a long-term decline in new medicine approvals. Included in the model is the Cleveland-based development company BioMotiv, a for-profit entity created by Cleveland’s University Hospitals health system in 2012. For more information, please visit HarringtonDiscovery.org

BioMotiv is the mission-driven accelerator associated with The Harrington Project for Discovery & Development, a $250 million national initiative for advancing medicine centered at University Hospitals in Cleveland. The focus is to accelerate breakthrough discoveries from research institutions into therapeutics for patients through an innovative model that efficiently aligns capital and collaborations. The company leverages an experienced team and advisory board to select, fund, and actively manage and advance a portfolio of programs. BioMotiv most recently announced a partnership with Japanese-based Takeda Pharmaceutical Company Limited.

The well-being and mental health of young people in low - and middle - income countries have been dramatically affected by the series of crises hitting the world. As the international community continues to struggle with the impact of COVID-19, conflict and climate change, the latest report from the Young Lives project shows a long-running upward trend in young people’s well-being has been sharply reversed alongside widespread anxiety and depression. Young people are less confident about their futures for the first time in the 20-year study.

Bacterial infections linked to one in eight global deaths, according to GRAM study

The Leedham Lab in Nuffield Department of Medicine (NDM) has been awarded over £2M from Cancer Research UK to develop a new tool that could help guide how bowel cancer patients are treated in the future.

The award recognises Radcliffe Department of Medicine's Professor Higgs major contribution to our understanding of how mammalian genes are switched on and off, and using haematopoiesis as a model to understand how genes function.

A new Oxford University study released during World Antimicrobial Awareness Week has significant findings on how antimicrobial resistance (AMR) arises and persists. The results, published today in Nature Communications, provide the first direct evidence of AMR bacteria migrating from a patient’s gut microbiome to the lungs, increasing the risk of deadly infections.