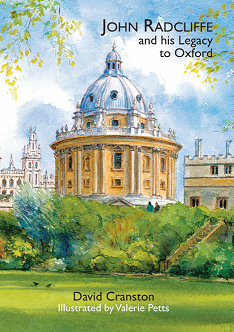 John Radcliffe is a name known to every Oxford resident. The hospital bears his name, and the Radcliffe Camera is but one monument to his legacy. But who was he? What sort of doctor was he, and whom did he treat? How did he manage to amass such a fortune and bestow his name and influence on so much of the city? David Cranston’s short book tells the story of John Radcliffe and the legacy he left behind.

Professor Sir David Watson, Principal, Green Templeton College commented: “John Radcliffe’s bequests have changed the face of historical Oxford, and their effects live on. Green Templeton College Fellow David Cranston has performed a valuable service, in the tercentenary year of the Doctor’s death, by showing how and why this came about.  As the College views the 21st century physical evolution of Oxford University, from the commanding heights of the Radcliffe Observatory, it is salutary to reflect on how science, medicine, management and architecture have made use of this legacy, and continue to do so through our work in education, research and public service.”

Sir Roger Bannister, a former Radcliffe Travelling Fellow said: “I am delighted as a physician to commend a book written by a surgeon about a physician. In 1960 I had the good fortune to benefit from one of John Radcliffe’s many acts of generosity to Oxford University. Holding a John Radcliffe Medical Travelling Fellowship, I spent a year at Harvard as part of my training to become a Consultant Neurologist. In the 18th century, Radcliffe Medical Fellows commonly went to the European centres of medical excellence, such as Bologna in Italy. That wise and robust sage, Dr Samuel Johnson, remarked that they and their patients might benefit more if they visited underdeveloped parts of the world such as South America, to study treatments and drugs outside Britain and Europe. Had they taken his advice, we might have benefited two centuries earlier from a wide range of drugs discovered in South America, such as curare”.

To order visit www.wordsbydesign.co.uk and follow the ‘books for sale’ link.

Around 15% of people aged 40-75 may have a form of undiagnosed high blood pressure (hypertension) that occurs only at night-time. Because they do not know about this, and therefore are not being treated for it, they are at a higher risk of cardiovascular disease such as stroke, heart failure, and even death, suggests new research from the University of Oxford published in the British Journal of General Practice.

Dr Qiang Zhang of the Radcliffe Department of Medicine explains how artificial intelligence is being used to help researchers and physicians interpret medical imaging.

Researchers in Department of Physiology, Anatomy and Genetics have identified a rescue mechanism that allows cancers to overcome the consequences of inactivating mutations in critically important genes.