On the morning of 13 May 1935, T. E. Lawrence (“Lawrence of Arabia”) set out from his cottage, Clouds Hill, on his Brough Superior motorcycle to post a parcel of books to his friend ’Jock’ Chambers. It was to be his last journey. On the way home he swerved to avoid two boys on bicycles and was thrown over the handlebars, fracturing his skull. He was treated at Bovington Camp Military Hospital by the neurosurgeon, Hugh Cairns, but died six days later without regaining consciousness. He was just 46 years old. Lawrence had achieved fame for his role in the Arab Revolt against the Ottoman Empire during the First World War, fighting alongside the Arab factions and co-ordinating their guerilla warfare to complement the British military strategy. His account of these years was later published as The Seven Pillars of Wisdom, written during a seven year fellowship at All Souls, Oxford. 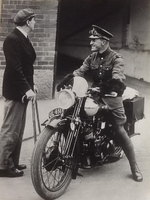 Hugh Cairns (1896-1952) was profoundly affected by Lawrence’s death and began a campaign to reduce the number of motorcyclists killed by head injuries, by the introduction of appropriate headgear. He conducted research over a number of years to develop the most effective type of crash helmet and to prove their efficacy in reducing death and serious trauma. As a direct result of his research, the British army made crash helmets compulsory in November 1941. Cairns continued to campaign and publish on the benefits of crash helmets, but it was not until 1973 that they were made compulsory for civilian motorcyclists in the United Kingdom. This safety measure has prevented countless fatal injuries throughout the world.

Cairns had specialized in neurosurgery since working at the London Hospital in the 1920s. In 1937 he was appointed the first Nuffield Professor of Surgery at Oxford. In spite of Chamberlain’s appeasement of Hitler in 1938, Cairns foresaw the advent of war, and formulated the idea of a special hospital for head injuries at Oxford. St Hugh’s College was requisitioned and the Military Hospital for Head Injuries,

popularly known as ‘The Nutcrackers Suite’, was created. By the time it was opened in February 1940, the war was underway and it was quickly commandeered by the War Office with Cairns at the helm, co-opted as Lieutenant. The hospital grew rapidly and Cairns and his team were at the forefront of clinical developments in the field of head trauma. As part of his efforts to improve the outcome for soldiers who had suffered head injuries, he pioneered the use of mobile neurosurgical units which were deployed close to the battlefield, reducing the time between injury and treatment. In addition he worked with fellow Australian and Oxford professor of pathology, Howard Florey, to implement the use of the new antibiotic, penicillin, to reduce the number of deaths from infection following surgery. Amongst his papers given recently to the Bodleian Library, there is a letter written to his wife from North Africa in 1943:

'Today is my first breather since July 3. I have travelled about 1400 miles since then and have seen two of our neurosurgical teams. Florey and I have been together, and we have been making arrangements for the use of penicillin. I think our plans will work all right if put to the test, but that remains to be seen.

We are both very fit in spite of temperatures up to 120oF in the shade and at times a good deal of dust. This is partly due to excellent feeding, perhaps also to the fact that we were both used to this sort of thing as boys...All told the medical services are doing an excellent job (even Florey admits it) and the troops are in fine shape. But what a vast, incredibly elaborate organisation it is, and so much horrible destruction.'

This story is one of many which are revealed in the Bodleian Library’s current exhibition, ‘Great Medical Discoveries: 800 years of Oxford innovation’. Visit the exhibition online or in person to learn more about the remarkable contribution of Oxford scientists, medics and clinicians through the centuries.

T.E. Lawrence astride his Brough Superior, talking to the designer of the motorbike, George Brough, who was recovering from two broken legs sustained in a motorbike accident, 1930. Bodleian Library, MS. Photogr. c. 126, fol. 34

New reporting guidelines, jointly published in Nature Medicine and the BMJ by Oxford researchers, will ensure that early studies on using Artificial Intelligence (AI) to treat real patients will give researchers the information needed to develop AI systems safely and effectively.

The Moh Family Foundation has given a substantial gift to support the work of Oxford University’s Pandemic Sciences Institute, greatly strengthening its ability to identify and counter future pandemic threats and ensure equitable access to treatments and vaccines around the world.

The NIHR has awarded three new Blood and Transplant Research Units (BTRUs) to the University of Oxford.

COVID-19 vaccines given as fourth doses in the UK offer excellent boosting immunity protection, according to the latest results from a nationwide NIHR-supported study.

A recent study of patient health records found that around 1 in 100 people with COVID-19 had a venal or arterial thrombosis, with rates higher still among males, and particularly for those hospitalised.