Closing the ring in cell division 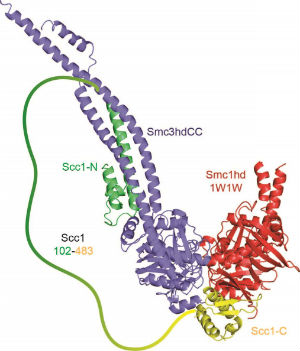 A new study fills in the gaps in our understanding of a protein complex that traps DNA during cell division until the critical moment just before the daughter cells separate. The researchers behind the work, from Kim Nasmyth's lab in the Department of Biochemistry and the lab of Jan Löwe at the MRC LMB in Cambridge, describe their findings in a recent paper in Science (1). Using new structural information about how the individual components of the cohesin complex fit together, the group has confirmed in living cells what has been suspected to be the case - that the complex adopts a ring structure that holds the two arms of the chromosome together until exactly the right moment in cell division. Researchers can now begin to probe the mechanisms behind cohesin's functions.

Researchers at Oxford University’s Department of Psychiatry have found that people with schizophrenia and related disorders are at higher-than-average risk of perpetrating violence, but that the overall risk remains low (less than 1 in 20 in women, and less than 1 in 4 for men over a 35-year period for violent arrests and crimes).

An estimated 1.2 million people died in 2019 from antibiotic-resistant bacterial infections

Researchers from Oxford’s Department of Experimental Psychology and Nuffield Department of Clinical Neurosciences have shown that people who have had Covid but don’t complain of long Covid symptoms in daily life nevertheless can show degraded attention and memory for up to 6-9 months.

Plaster cast or metal pins to treat a broken wrist? The results are in.

An Oxford study published in The BMJ has found the use of metal K-wires (commonly known as ‘pins’) to hold broken wrist bones in place while they heal are no better than a traditional moulded plaster cast.

A pioneering book from Professor Zoltán Molnár and Yale Professors Tamas Horvath and Joy Hirsch to be released on 1 February 2022 addresses the fundamental relationship between the body, brain and behaviour.